A few months ago I wrote a post on how I wanted to give up chocolate, and guess what? I failed. And why did I fail? Because I’m a sugar addict, a complete and utter sugar addict.

END_OF_DOCUMENT_TOKEN_TO_BE_REPLACED

I’ve seen so many people talking about The Diner before, it seems like it’s got bit of a cult following around London. I’d never been to one before, but after hearing everyone raving about the food I decided I had to make a visit on my last London trip.

END_OF_DOCUMENT_TOKEN_TO_BE_REPLACED

My name’s Lisa, and I’m a sugar addict. And I don’t mean your usual I love chocolate type, I mean I’m completely and utterly unable to function without it. You see for years and years now I’ve been abusing my poor body, having had comfort ate for years, along with having a Mcjob for 5 years which offered you free food, and just not eating properly. It’s no wonder I’m overweight. My love of sugar hasn’t just made me overweight, oh no, it’s caused me a whole load of problems, and the inability to live without it.

END_OF_DOCUMENT_TOKEN_TO_BE_REPLACED

Hands up who loves cocktails? If you asked me the same question, I can guarantee you that my hand would firmly be in the air. Back when I was at university we lived near some great cocktail bars, and would often spend all of our money on these fancy drinks. Now that my uni days are completely over (three years since I finished this year, sob), and I live back in good old central Bedfordshire, there aren’t many fancy cocktail bars near me, so I just have to put up with my local Wetherspoons variations. 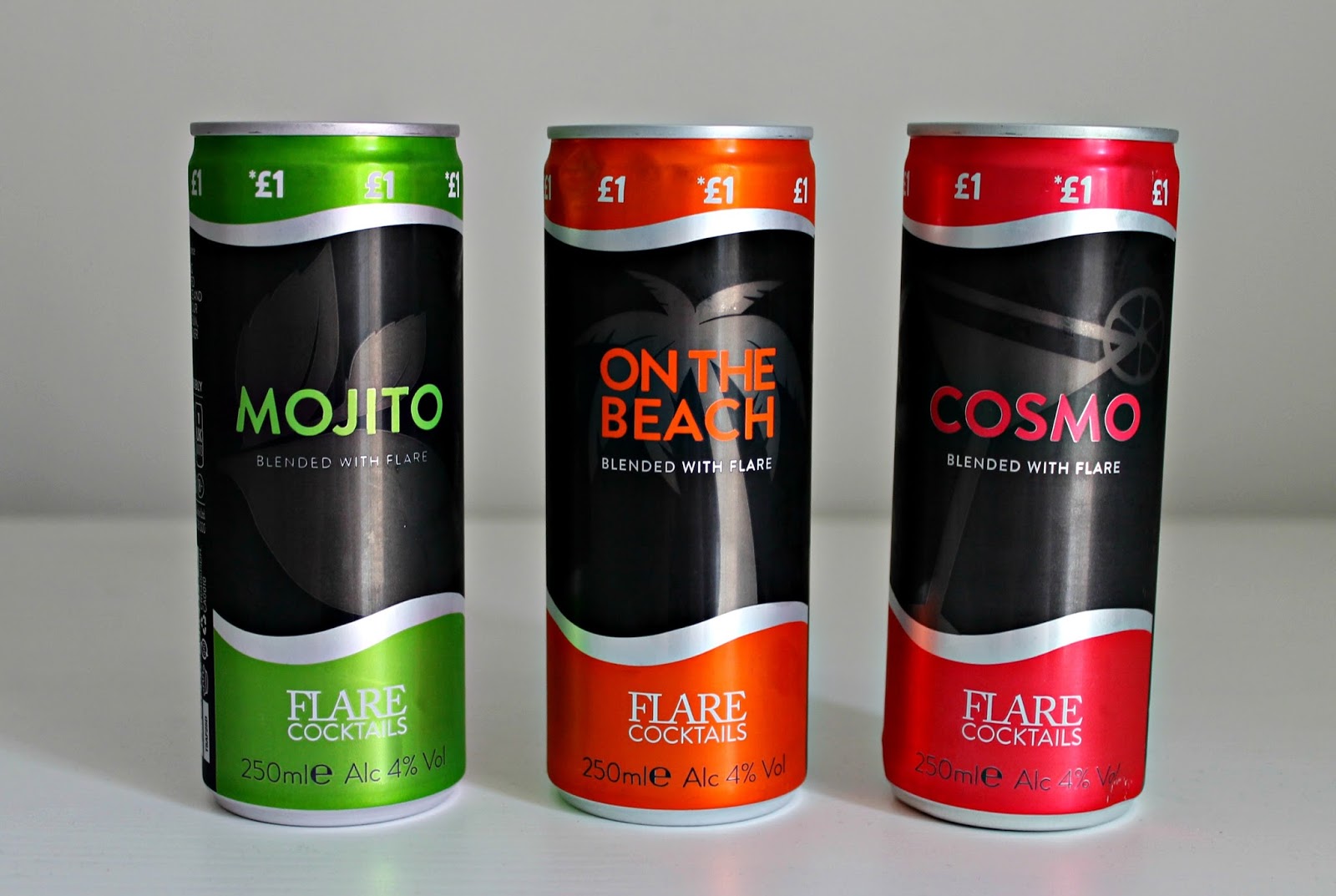 Recently Flare Cocktails got in touch to ask if I’d like to try out a few of their cocktails at home, and of course the answer was a very strong yes. Flare Cocktails offer a range of premixed cocktails in a can, perfect if like me, you live nowhere near a cocktail bar, for you to enjoy at home. They currently offer three variations, Mojito, On The Beach, and Cosmo. 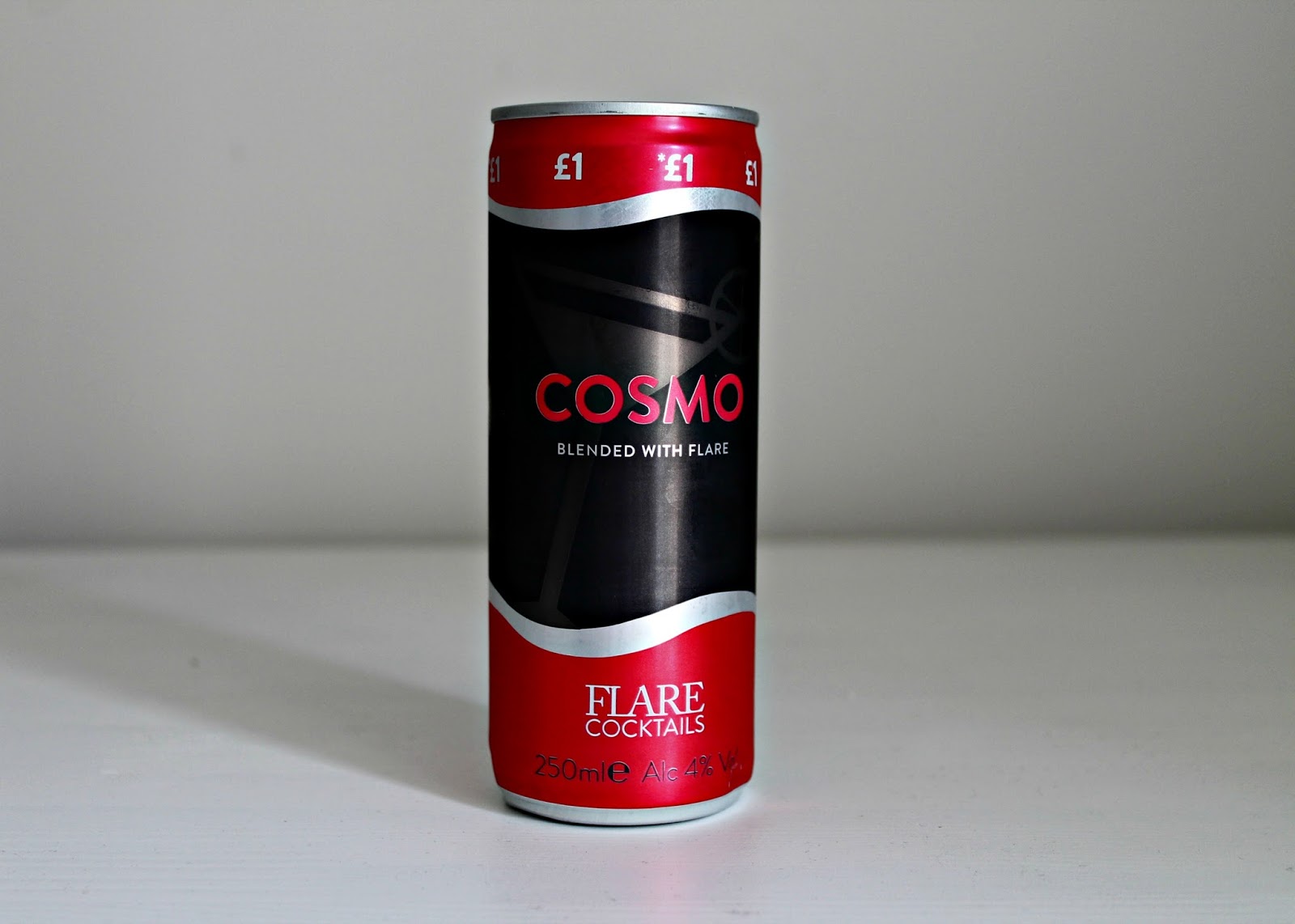 The Cosmo flavour is made up of vodka, cranberry, lime juice and orange flavours. I’d say out of the three this is the more sweeter tasting one, which I don’t mind, but I don’t think I could have more than one. To be honest I’m not a big cosmopolitan fan, but I can imagine this is lovely for someone who is. 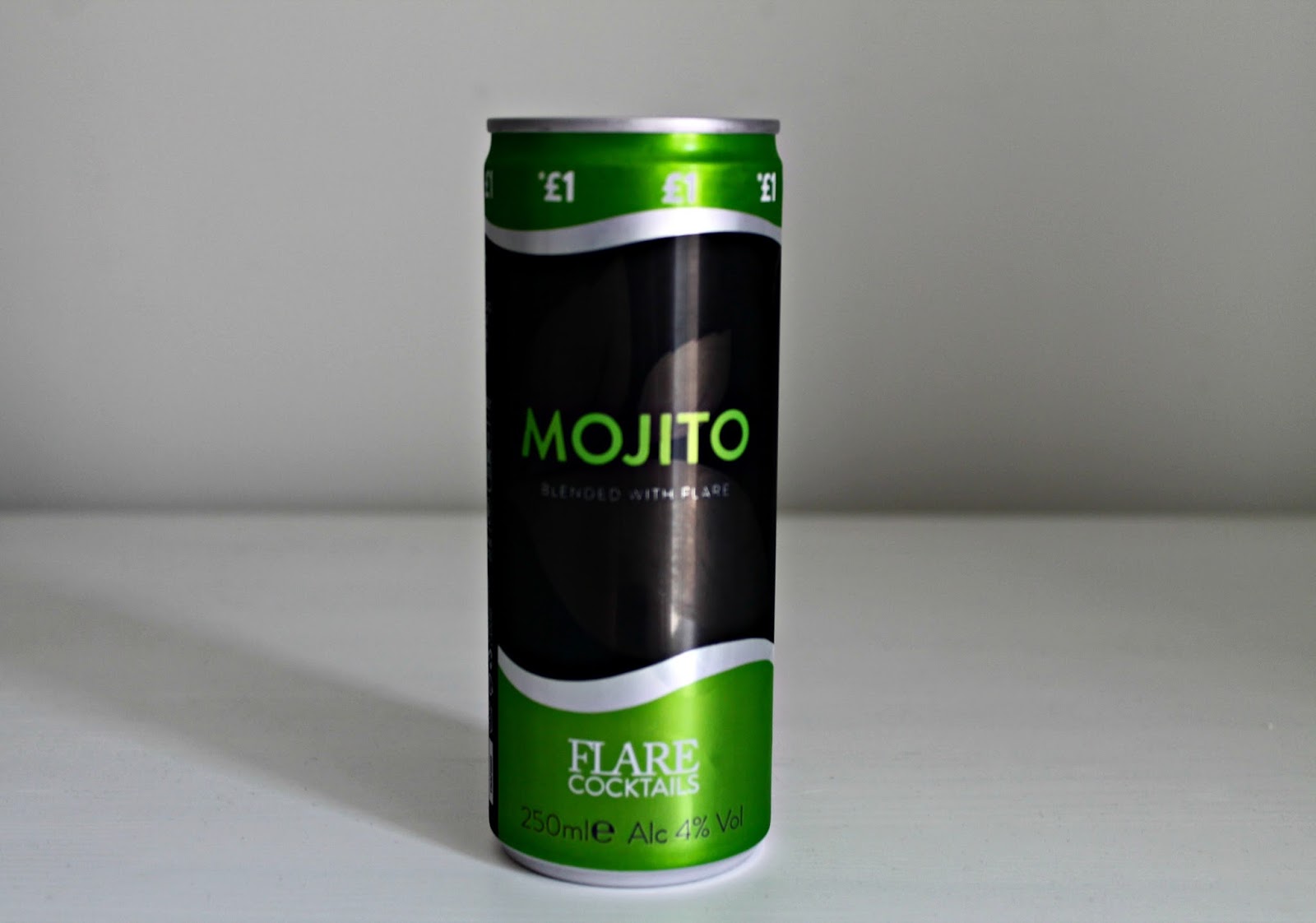 Mojito’s are my favourite drink because not only is the word alone fun to say, but they are really refreshing and sweet. Like any classic mojito, this has been made up of white rum, lime juice, and garden mint extract. This was, naturally, my favourite out of the three drinks and I found it really refreshing served over ice with some additional mint. 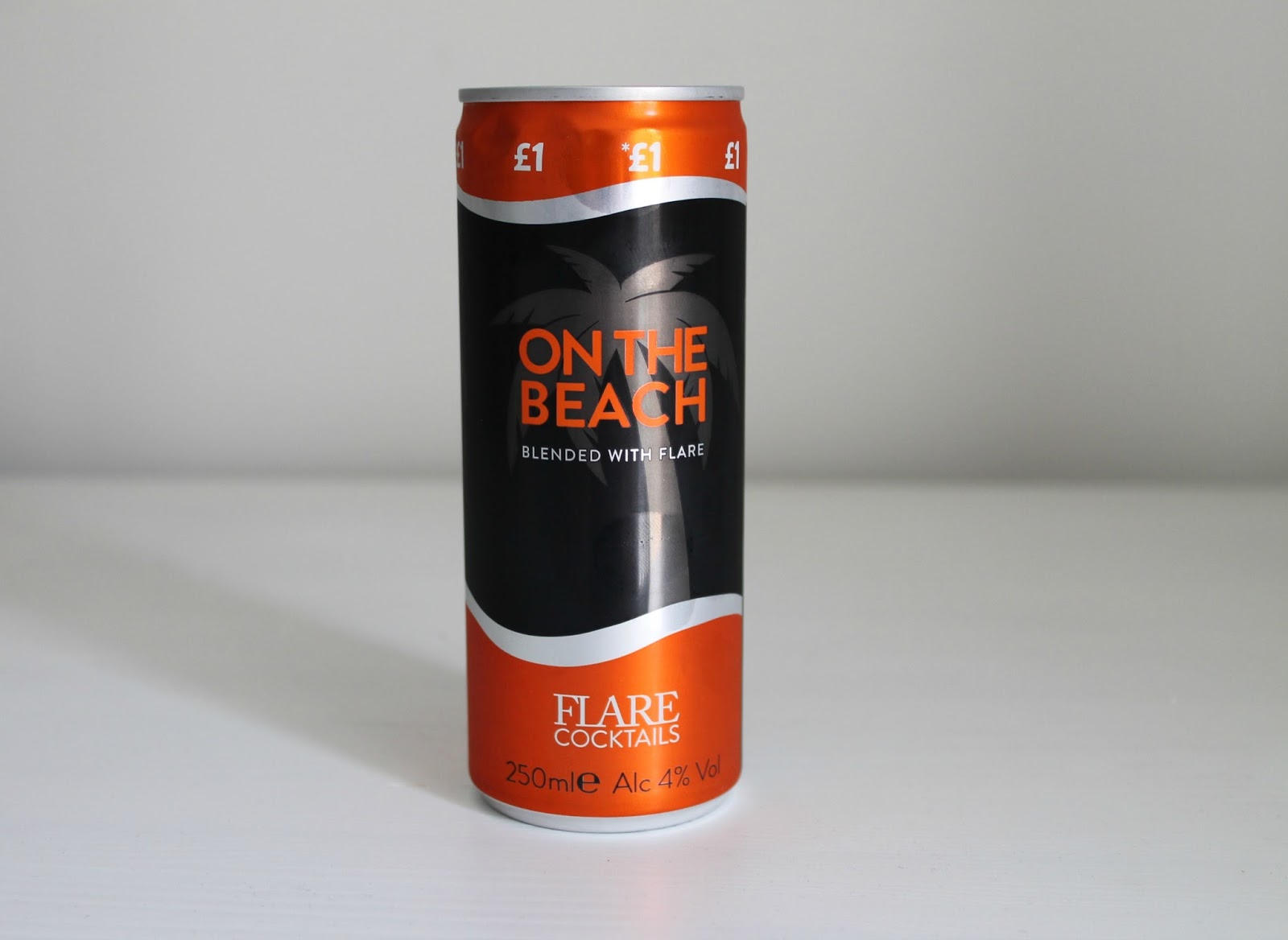 On The Beach is a mix of peach schnapps, orange and cranberry flavours. On The Beach is another rather sweet tasting cocktail, but I didn’t find it as sweet as Cosmo. I found this one really easy to drink, and it was gorgeous on a sunny afternoon over ice.

All of the Flare Cocktails were lovely, and are only £1 each, making them a great substitute for buying an overpriced cocktail in a fancy bar. I think I’ll be stocking up on a few of these now the days are getting warmer, and I’m looking forward to sipping away on these sat on my balcony.

A few weeks ago now I met up with a few of my Cambridge friends Laura and Pippa, as well as meeting Sophie for the first time. The original plan was for a few of us Camb Meetup girls to meet up and go for lunch, but a few people dropped out so it ended up just being us four. Despite there only being a few of us, it was still lovely to get together and have a good natter over lunch, especially as I hadn’t seen Laura or Pippa in nearly a year! We visited Pho for lunch, a recently opened in Cambridge, Vietnamese restaurant. I’m a little boring when it comes to food, and can be a bit set in my ways, and having never tried Vietnamese food before I was a little wary. But I had a little look at the menu, and most of it appealed to me and seemed pretty similar to Wagamamas etc, so I thought I’d be a little adventurous and give it a good try. 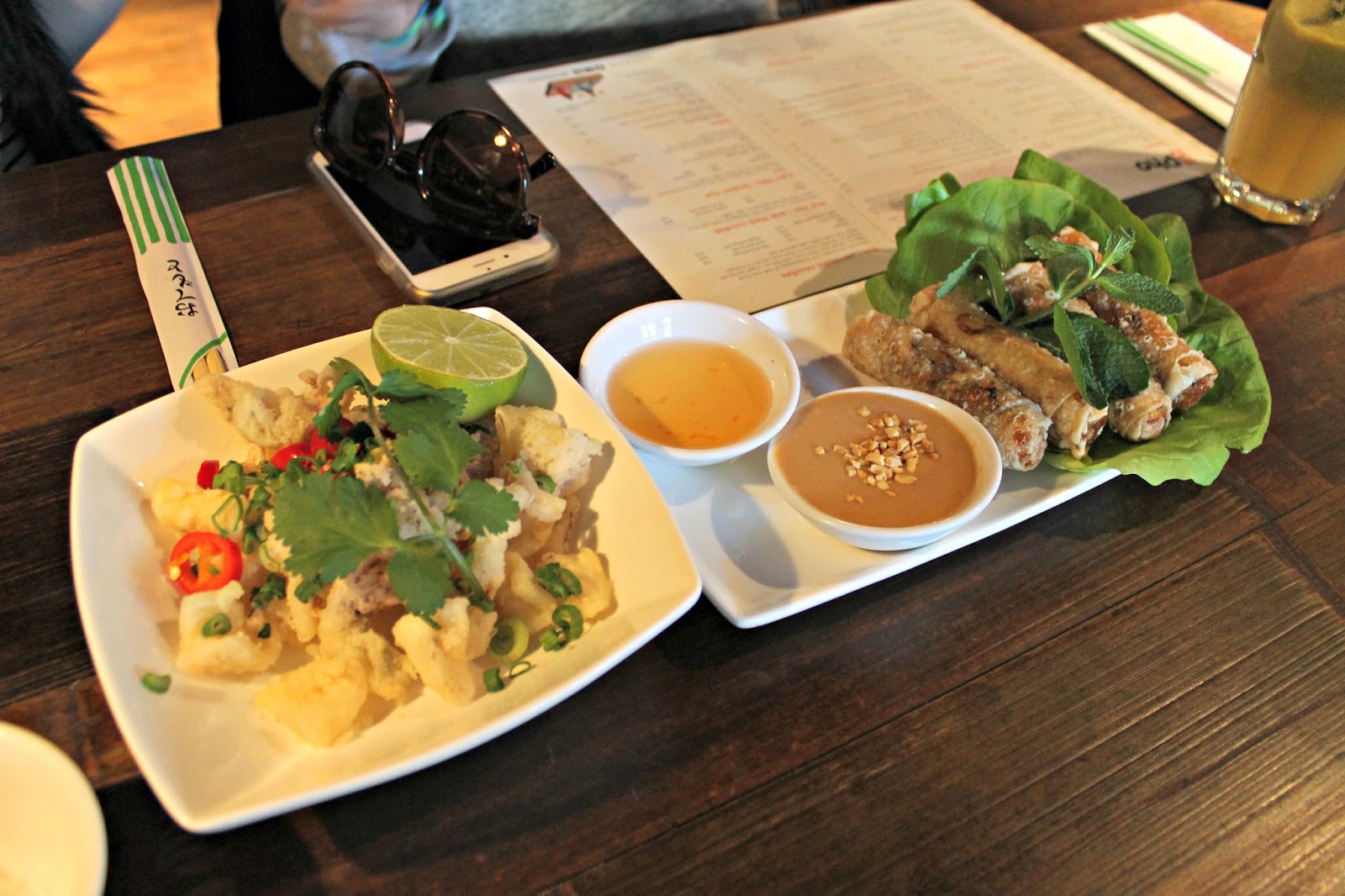 Once we arrived the waiting staff were very enthusiastic and were more than happy to explain the menu to us and answer any questions we had. I’m not a massive fan of spicy food, but the staff pointed out a few dishes to me that weren’t that spicy, and there was still plenty of options for me.

While we finished looking over the menu I ordered an apple, beetroot and carrot fresh juice, which was pretty tasty while we finished making up our minds on what to order. In the end, and after some persuasion from our server, we decided to all share the starters, and chose the Muc chien gion (baby squid) and Cha Gio (crispy spring rolls). The spring rolls were some of the loveliest spring rolls I’ve ever tasted, and were even nicer if you wrapped them in a lettuce leaf with the peanut sauce. The squid was very crunchy, and had plenty of flavour. 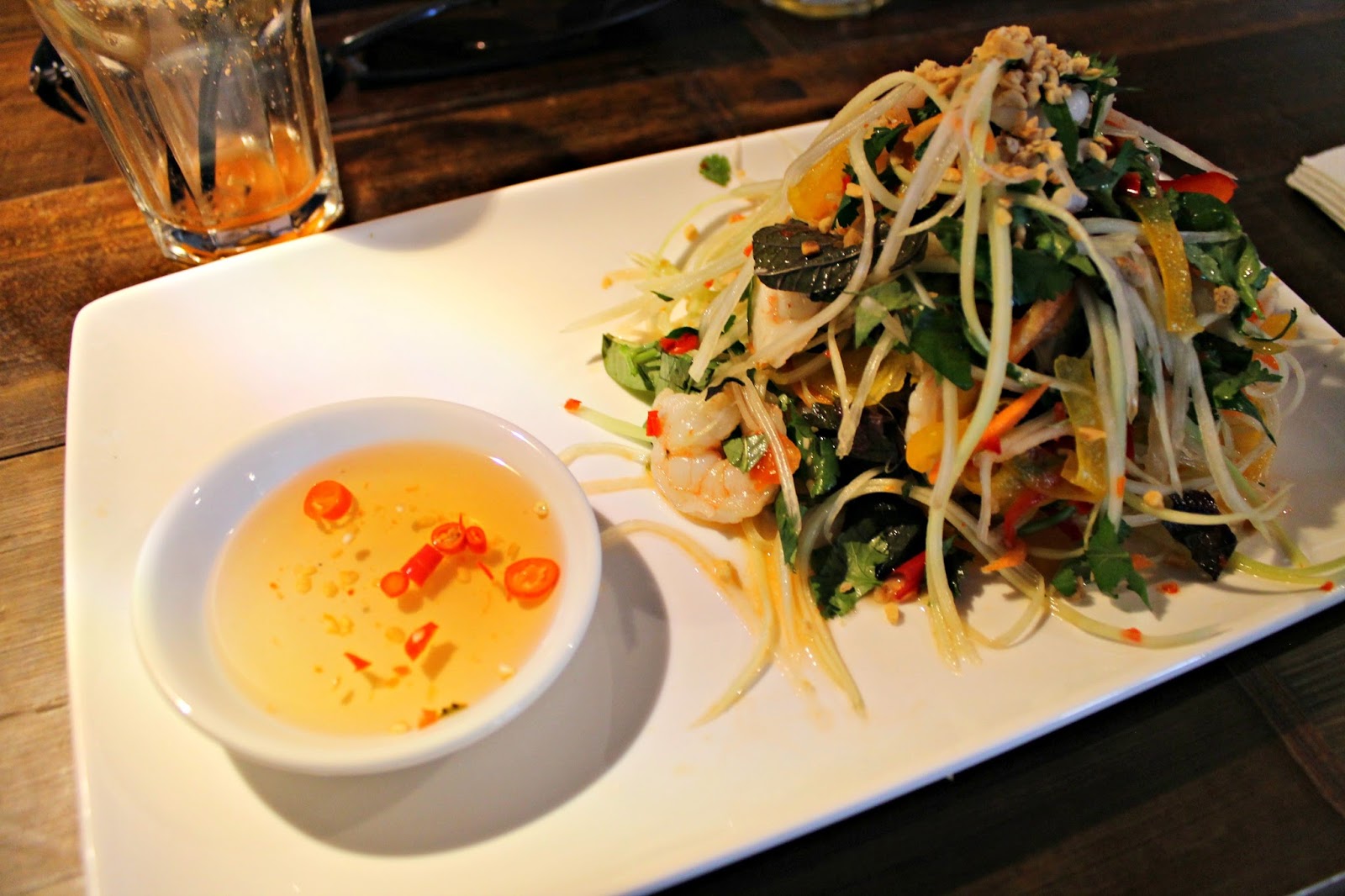 I wasn’t really sure what to go for for my main course. There was plenty of choice with noodley and curry dishes, but I was feeling pretty boring and chose a Goi Ga, a Vietnamese salad with prawns. I wasn’t sure what a Vietnamese salad was, and really should have asked, because once it arrived it really wasn’t what I expected. I’d say it’s more like a stir fry, with thinly cut vegetables, and lots of coriander. I really enjoyed it, but I’d say there was a bit too much coriander for my liking, and everyone else’s big bowls of curry and noodles looked much more appealing to me! At least I know what to order next time.

After we’d finished eating we were all too full to even look at the dessert menu, so ordered a couple more drinks and had a natter. Before we realised hours had passed and we’d spent the afternoon talking about absolutely everything and anything, it was a lovely way to spend an afternoon! I really enjoyed my visit to Pho, and next time I’ll certainly be a little more adventurous with the menu!

Have you visited a Pho before? What did you think?

Lisahh-Jayne is your average 20-something who writes about her life on the internet. Enjoy!

💻 Milton Keynes beauty, food and lifestyle blogger
🌍 I like to narrate my life through the internet
📧 Email - lisahh-jayne@hotmail.co.uk

How has our happy smiley Ivy been here for 3 month

The best friendship is between a mohawk baby and a